Shocker: Woman Caught Trying To Dump Her Lover's Dead Body Inside A Bush In Ogun 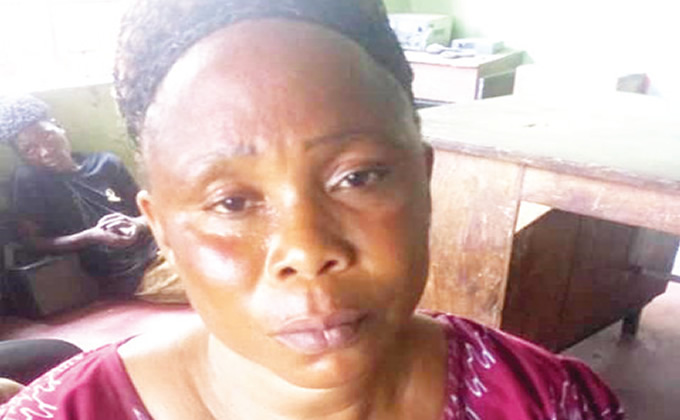 
Operatives of the Ogun State Police Command have arrested a 45-year-old woman, Aderonke Ayinde, for allegedly dumping the corpse of her lover, Asimiu Abiodun, in the bush, Punch Metro reports.

The suspect was reportedly caught by a neighbour, Makinde Ishola, while trying to dump the corpse of her lover, who had passed the night in her rented apartment, in the bush.

Abiodun was said to have died in the middle of the night at the suspect’s No. 1 Asalu Compound, Abeokuta, residence.

The Police Public Relations Officer in the state, Abimbola Oyeyemi, discolsed this in a statement made available to PUNCH Metro on Thursday.

The PPRO said, “The arrest of the suspect followed a report lodged in the Oke-Itoku Police Station by one Makinde Ishola, who reported that he received information that a middle-aged man, whose name was later known as Asimiu Abiodun, came to visit the suspect at her No. 1 Asalu Compound, Abeokuta, residence.


“The said man died in the middle of the night in questionable circumstances.


“He (Ishola) stated further that the suspect took the dead body to a nearby bush that night and dumped it there, unknown to her that somebody nearby was observing the whole thing.”

Oyeyemi added, “On the strength of the report, the DPO, Oke-Itoku Division, SP Olatoye Kotonu, led detectives to the scene, where the suspect was promptly arrested and the corpse evacuated to the mortuary for autopsy.


“Upon interrogation, the suspect claimed that the deceased was her long time lover, who used to pass the night in her place, but on that fateful day, he came as usual, but suddenly developed a strange illness in the night and before she could call for help, the man died.


“She further stated that she decided to dispose of the body out of fear.”

The family of the deceased, according to Oyeyemi, has been contacted by the police for proper identification.

He added that the Commissioner of Police, Ahmed Iliyasu, had directed the homicide section of the State Criminal Investigation and Intelligence Department to take over the case for proper investigation and possible prosecution of the suspect.