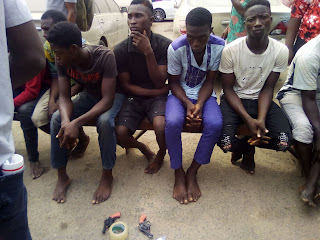 According to the police, on 30th December 2018, at about 20:30hours, information was received from one Ayilara Babatunde Sheriff, that some unknown hoodlums invaded his house at Ijanikin area preparing to carry out a robbery operation. But before the hoodlums began their operation, a team of policemen from FSARS swung into action and arrested the four suspects at the scene of the crime at Ijanikin.

Items recovered from the suspects were one brown bag containing two toy pistols, one table knife and one big cello tape.

The Lagos State Commissioner of Police, Mr. Edgal Imohimi, said that the four suspects will be charged to court at the conclusion of investigations.