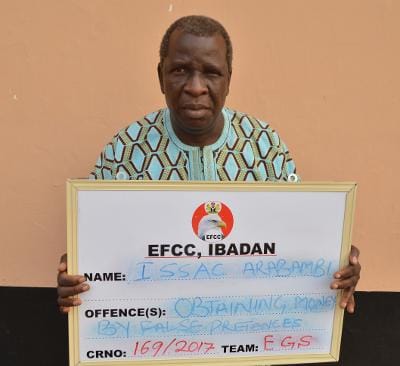 The Economic and Financial Crimes Commission, EFCC, Ibadan Zonal Office, on January 21, 2019 arraigned one Pastor Isaac Arabambi along with his company, Heroes Investment Company Limited before Justice Joyce Abdulmalik of the Federal High Court sitting in Ibadan, Oyo State, on a four-count charge bordering on obtaining money by false pretence.

Arabambi is also standing trial on another 11-count charge bordering on unauthorized operation of a financial institution and obtaining the sum of N62, 326,250.60 (Sixty Two Million, Three Hundred and Twenty Six Thousand Two Hundred and Fifty Naira Sixty Kobo) only by false pretence, and was earlier arraigned on January 15, 2019 before the same judge.


One of the four counts reads: “That you Isaac Arabambi and Heroes Investment Limited on or about 14th July, 2016 at Ibadan within the Ibadan jurisdiction of this Honourable Court with intent to defraud, obtained the sum of N1,910,000 from one Lala Sunday by falsely representing that the money would be invested in his Borrowed Fund Account domiciled with you, which representation you knew to be false and thereby committed an offence contrary to Section 1(1)(a)and punishable under Section 1(3) of the Advance Fee Fraud and Other Fraud Related Offenses Act 2006”.

He pleaded “not guilty” to the charges.

Prosecuting counsel, Mabas Mabur, thereafter, applied for a trial date and for the defendant to be remanded in prison custody.

Defence counsel, Kazeem Olaniyan, however, moved a motion praying the Court to grant him bail.
Justice Abdulmalik, granted the defendant bail in the sum of N500, 000 and one surety in like sum, who must deposit his international passport with the Court and must be a civil servant with the Oyo State Civil Service not below grade level 12.

The trial judge held that: “The surety will also depose to an affidavit of mean and must undertake to produce the defendant. The surety must produce a letter of introduction by his organization and also the account statement of his salary account duly endorsed by the branch manager. The surety shall be verified by the Deputy Chief Registrar of the court”.

While adjourning to February 20, 2019 the trial judge ordered that he should be remanded in Agodi Prison pending the perfection of his bail application.