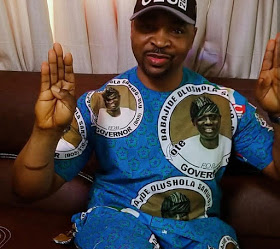 Aduke Akinsanya, a daughter to a chieftain of the National Union of Road Transport Worker (NURTW), Alhaji Musiliu Akinsanya, aka MC Oluomo, has debunked rumours making the rounds on social media that her father is dead.

MC Oluomo was stabbed during the rally of the All Progressives Congress (APC) earlier this week.

And on Thursday, news of his alleged death began to spread.

However, reacting to the development, Aduke took to her Instagram page to dispel the death rumours trailing her father.

In a post shared via her Instastory, she wrote: “Y’all should stop coming to my DM to with stupid text message. Oluomo is not dead biko.

“And for you idiot saying how can knife penetrate in his body that he doesn’t have charm, go ask Google for that don’t come to my DM for meaningless questions. Oluomo is not dead. My daddy is strong and healthy.”