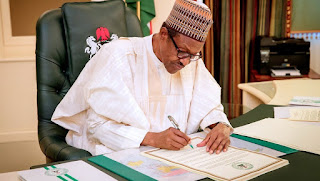 As the 2019 governorship election draws nearer, President Buhari has advised Nigerians not to re-elect state governors that have formed the habit of owing workers in their state civil service many months of salaries despite receiving bailouts from Federal government.

In an interview with the Hausa service of Voice of America, VOA, which was aired yesterday, President Buhari said he saw no justification in governors collecting bailout funds from the Federal Government and still fail to pay the salaries of the civil servants. He stressed that workers have families as well to cater for and it is a matter of importance for a responsible governor to ensure that he pays the salaries of his workers.

“I wonder how these governors are able to sleep, knowing that they have refused to pay workers their wages. These workers have families to cater for, they pay rent, pay school fees, hospital bills and food for their families.” he said