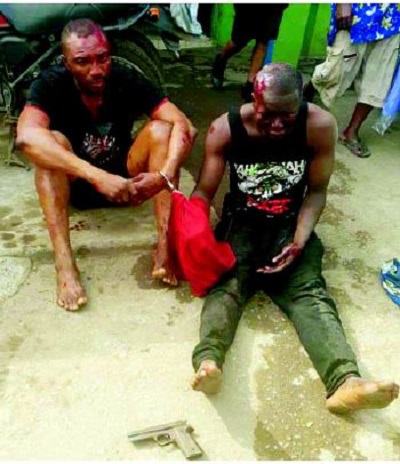 
Policemen attached to Ilasamaja division have arrested two suspected members of a robbery syndicate that specialised in attacking customers, who had gone to withdraw money from banks at Sadiku/ Ilasamaja, along the Oshodi-Apapa expressway, Lagos.

The syndicate which usually operate on motorcycle positioned themselves along the service lane, awaiting their victims.

Following several complaints of attacks, the Lagos State Police Command boss, Mr Edgal Imohimi, directed 24 hours surveillance around the banks and others along the expressway.

Vanguard gathered that immediately a male customer who had gone to withdraw N350,000 stepped out of one of the banks at about 2pm , Friday, the suspects: Boniface Ewerem(46) and Joseph,(42) ordered him to bring the money, pointing a gun at him.

One of them according to eye witnesses fired a shot into the air as he snatched the money from the customer and zoomed off in their operational motorbike.

Luck, however, ran against them as policemen from Ilasamaja chased and caught up with them. Angry members of the community requested that the suspects be handed over to them with an apparent intent to carry out jungle justice on them.

Explaining how they were arrested, one of the residents, Ayiola Ganiu, said “The attacked customer raised the alarm which alerted us. Everyone chased them. They abandoned their motorbike and ran across the express, inward Soaps, unknown to them that there was a police station on that side. Policemen at Ilasamaja division, led by their DPO, joined in the chase until they were caught.

“If the Police had not intervened, the robbers would have been lynched because they have sent many lives to oremature deaths. We wanted them to serve as deterrents to their colleagues. Unfortunately for us, the Police were present.

The suspects during interrogation revealed that they came from Iba area of the state to operate.

One of the suspects, Joseph, said they intended to use their loot to celebrate Christmas with their families.

He said: “This is my first time. I wanted to use the money I would have stolen to celebrate Christmas. We never had any intention to kill our victims”

The suspects, as gathered, were immediately transferred to the Federal Special Anti-Robbery Squad, as a crowd thronged the station.

One brownie pistol and two life ammunition, as gathered, were recovered from them, including the stolen money which has been returned to the owner.