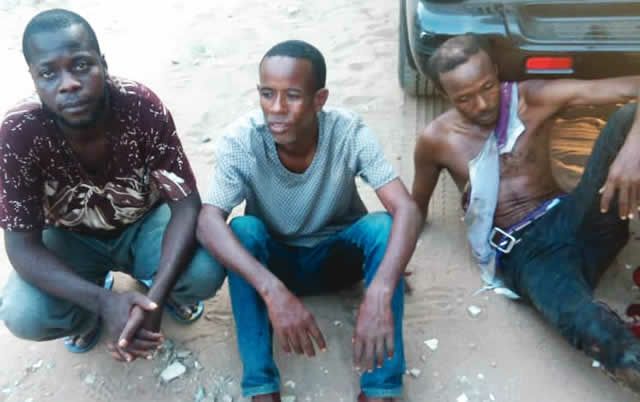 The dreaded kidnap and armed robbery suspects
Some notorious kidnap and armed robbery suspects have been apprehended by operatives of the Federal Special Anti-Robbery Squad of the Imo State Police Command.
The said to be on the command’s wanted list were paraded by the Commissioner of Police in the state, Dasuki Galadanchi, who told Southern City News that the suspects, Ibrahim Bello, Umaru Abubakar and one Hassan, were arrested on December 5, 2018, at Avu in the Owerri West Local Government Area .
Galadanchi said the suspects stabbed one of his men, adding that this led to the suspects’ arrest .
The CP said, “They were arrested at Avu Junction by the Port Harcourt -Owerri Expressway by F -SARS operatives led by the Commander, Victor Godfrey.

"The suspects are Ibrahim Bello , aka IBB, 35, a native of Panchin in the Jada Local Government Area of Adamawa State; Umaru Abubakar, 45, and Hassan (surname unknown).
“The group has been on the F-SARS wanted list , having been responsible for armed robbery and kidnapping in Avo and its environs .

“The first suspect, Ibrahim Bello, has confessed to the crime of kidnapping and stated that he and his gang members wanted to kidnap one building contractor along the Avo Road before their arrest .
During their arrest, one of the suspects, Hassan, stabbed one of the officers on his waist and right hand.
“The stabbed officer is currently hospitalised at an undisclosed clinic. Hassan and Umaru Abubakar, who took to their heels after the attack on the officer, were demobilised on their legs . They were rushed to the police clinic for medication.”
Galadanchi explained that investigation had commenced , noting that efforts were on to recover two assault rifles being used by the suspects .
He maintained that the command would liaise with members of the public through the Community policing strategies of the Inspector-General of Police towards achieving a crime -free Yuletide.