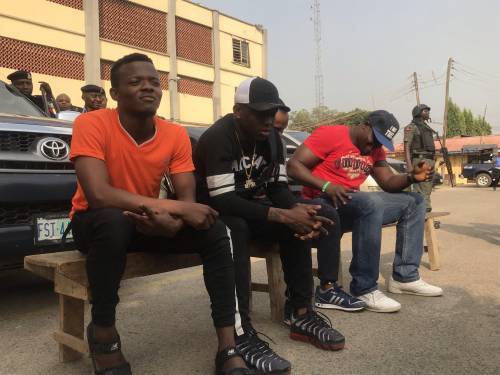 Small Doctor and the others arrested with him
Popular Nigerian street music singer, Adekunle Temitope, aka Small Doctor, has finally explained the circumstances that led to his arrest by the Nigerian police on Monday, Vanguard reports.
Speaking with Vanguard, the singer, who was released from police custody on Tuesday after much consultation said his issue with the police was a mere case of misunderstanding.
“It was a case of misunderstanding and everything had been settled. My fans need to know that I will not get involved in any illegality. The younger ones look to me for hope and I will never let them down”, he said.
The Penalty crooner insisted that he is licenced to own a gun, which is why he was shocked when he later read reports that he was in possession of illegal firearms.
“As I said earlier, I cannot be involved in any illegal activity. There is no way I will hold a firearm without having a licence.”
He, however, insisted that there was no way the incident would affect his concert scheduled to hold on Sunday, as adequate preparations have been made.
“My issue with the police is even a major reason for people to attend my Sunday show. There is no need to panic and we have invested heavily in the security of lives and properties,” he maintained.
The Penalty crooner, explaining why he settled for Agege Stadium in Lagos for his debut concert, stated, “I believe I am exceptional and people around me are exceptional too. I am a man of the people and I believe I should give back to my society. They have been the one supporting me from the onset. I want them to feel important and happy. Eko Hotel in Victoria Island, Lagos, cannot even handle the crowd I want to entertain.”