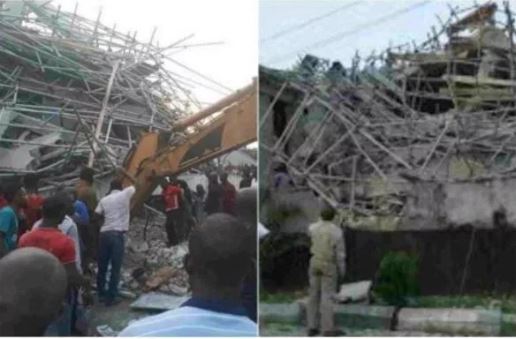 The scene of the sad incident
According to a report by New Telegraph, rescue workers yesterday pulled out four more bodies from the debris of the seven-storey building which collapsed about 12 days ago on Woji Road, GRA Phase 2, Port Harcourt.
The South-South Zonal Coordinator of the National Emergency Management Agency (NEMA), Martins Ejike, who disclosed this to journalists in Port Harcourt, expressed sadness over the lack of manpower in carrying out their operations.
He disclosed that the death toll had risen to 13 out of the 44 people who had been brought out from the rubble, with some of the remaining 31 people rescued receiving treatment.
Ejike noted that the peculiarity nature of the accident made it difficult for disaster management team to conclude the rescue operations despite the level of equipment deployed at the site.
He said: “The kind of experience we have in Port Harcourt as it concerns the collapse building we have not had it anywhere else. The way the building collapsed makes it very difficult for us to rescue victims.
“You have to park everything before you could be able to bring out anyone inside either alive or died, the building just fell down flat, something must be wrong somewhere, Meanwhile, Governor Nyesom Wike has inaugurated a Judicial Commission of Inquiry to investigate the collapsed building.
The governor also inaugurated the Judicial Commission of Inquiry into the management and affairs of Integrated Medical Industries Limited (Auto Disable Syringe). Wike performed the inauguration/ swearing of the two Judicial Commissions of Inquiry yesterday at the Government House, Port Harcourt.
The governor charged the commission to identify the owner of the building and the holder of the certificate of occupancy, and ascertain whether the architectural, engineering and structural designs of the said building were undertaken by competent and licensed experts in relevant fields.
He said: “To ascertain/identify the own-   er, developer and/or holder of the certificate of occupancy over and in respect of all that piece or parcel of land situate and lying at 119 Woji Road, (Plot 80), GRA Phase 2, Port Harcourt.
“Ascertain whether the construction of the seven–storey building on the said 119 Woji Road is covered by any valid or approved building plan and/or whether requisite approvals were issued by the appropriate ministry or agency of the Rivers State government prior to the commencement of construction.”
Wike also charged the commission to ascertain whether appropriate/necessary tests including soil tests were carried out to ascertain the suitability of the site for construction of a building of that size.
For the Judicial Commission of Inquiry to investigate the affairs of Integrated Medical Industries Limited, the governor charged the commission to ascertain how much the Rivers State government had invested in the company.
The commission is to ascertain if funds and assets of Integrated Medical Industries Limited were misappropriated during the period. Wike also charged them to identify the persons who sold or converted the properties of Integrated Medical Industries Limited. The commission’s Chairman, Justice Adolphus Enebeli, assured the governor that the commission would execute its assignment with the needed timeliness and in line with the law.
He said his members would not disappoint the government and people of Rivers State because the assignment touched the essence of humanity. Also, the Chairman of the Judicial Commission of Inquiry to investigate the affairs of the Integrated Medical Industries Limited, Justice Douye Green, promised that the commission would work in accordance with the terms of reference.