Ronaldo Urges Messi To 'Try Something New, Come To Italy' 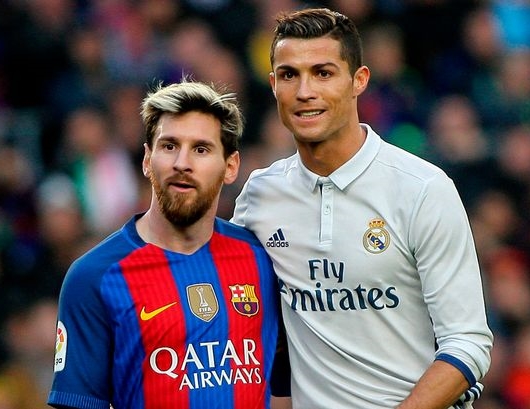 While speaking during interviews with three leading Italian sports dailies: La Gazzetta dello Sport, Corriere dello Sport and Tuttosport on Monday, Cristiano Ronaldo, who is marking his 150 days in Italy, issued a challenge to longtime rival, Lionel Messi to join him in Italy.

According to Dailymail, the Portuguese who moved to Juventus from Real Madrid in the summer for £90million, and has since scored 11 goals in 19 games for the Italian giants. was asked whether he missed Messi.

He said: 'No, maybe he misses me. I played in England, Spain, Italy, Portugal, in the national team, while he is still in Spain.


'Like me, accept the challenge. However, if he is happy there, I respect him, he is a fantastic player, a good guy but I do not miss anything here. This is my new life and I'm happy.'

Ronaldo went on to outline the differences between his time in Spain and at his new club, saying that: 'It's not fair to name just a few, but I can say that this is the best group I've ever played.

'Here we are a team, elsewhere someone feels bigger than others but here they are all on the same line, they are humble and want to win.


'If Dybala or Mandzukic do not mark, you still see them happy, smile. For me it is beautiful, I perceive the difference.


'Even in Madrid they are humble but here I feel they are more so. It is very different from Madrid, this is more a family .'

Ronaldo who has won five Ballon d'Or trophies and saw World Cup runner-up, Luka Modric, scoop it from him and Messi last week, reacted to the award which saw him finish second in Ballon d'Or voting to Modric.

He said: "Of course I'm disappointed, but life goes on and I will continue to work hard," said the 33-year-old.


"On the pitch I've done everything to win the Ballon d'Or, numbers do not lie, but I'm no less happy if I do not win, I have wonderful friends and a family, I play in one of the best clubs.


"Congratulations to Modric, who has earned the award, but next year we will meet again and I will do everything to win the prize again."
"Do you think I'm going home and crying?"