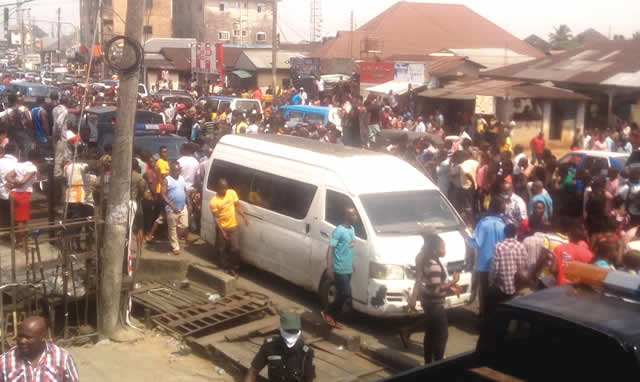 Crowd at the exhumation site
According to a report by Punch Metro, the men of the Rivers State Police Command, on Thursday, exhumed the decomposing corpse of a woman allegedly murdered by her lover in Rumuepirikom, Obio/Akpor Local Government Area of the state.
The woman, who was said to have been in a relationship with one Udenna Uwabie, also known as J-Boy, was buried in her lover’s room after she was allegedly killed on Sunday, December 2, 2018.
It was learnt that J-Boy and his lover, identified as Beta Anyaele, had a disagreement after he accused her of having an affair with another man.
A brother to the deceased, Eze Anyaele, said when J-Boy was asked of Beta’s whereabouts since Monday that she had been missing, he said he did not know where she was.
Eze told Southern City News that while the search continued, the matter was reported at the Kala Police Station, and that the operatives later found out that J-Boy had murdered his sister.
A pensive Eze called on the police to ensure that justice prevailed, noting that his sister must not die in vain.
It was observed that a large crowd had gathered around 10 am on Thursday at a house located along Wimpey, Ikwerre Road in Port Harcourt, where the deceased was buried, to witness the exhumation of the corpse by the police.
An eyewitness, who identified herself as Chika, said the police arrived the scene of the incident, went inside the suspect’s room, opened a shallow grave found in the room, and exhumed the decomposing corpse of a lady.
She said, “We only know the suspect as J-Boy; he is from Rumuepirikom, Obio-Akpor LGA, while the girlfriend hailed from Ndele in Emohua LGA.
“Some police officers came on Thursday morning and exhumed the decomposing remains of the murdered woman right inside J-Boy’s room in Chime’s compound.”
Punch Metro correspondents, who visited the scene of the incident, observed that policemen were positioned at strategic points to forestall any form of violence, while shops were closed and the compound, where the corpse was exhumed, was deserted.
When contacted, the Rivers State Police Public Relations Officer, Nnamdi Omoni, said the corpse of the murdered woman was exhumed and her remains taken to the mortuary.
Omoni also confirmed that the suspect had since been arrested and was helping the police in their investigation and would soon be charged to court.
“The exhumation of the body was successful; the remains of the victim have been taken to the mortuary and the police have commenced investigation into the incident. The suspect has been arrested,” he added.