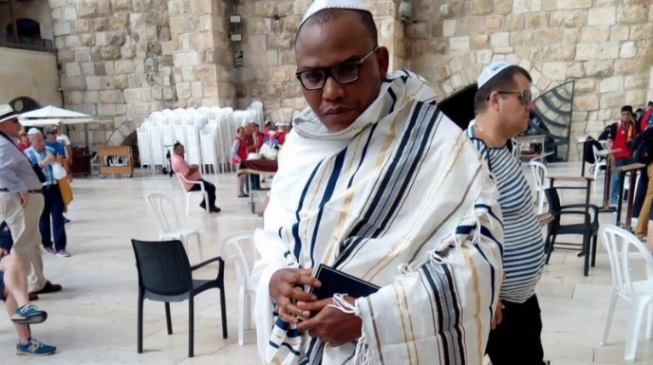 The leader of the Indigenous People of Biafra, IPOB, Nnamdi Kanu has raised alarm, warning the Federal Government of imminent terror attacks and death in Nigeria.

According to Kanu, the dreaded Islamist State for Iraq and Syria, ISIS, would soon take their bloodletting campaign to Nigeria’s territory.

In a broadcast aired on Ra­dio Biafra over the weekend, Kanu, who is currently on exile in Israel said mothers would be raped during the terror attacks.

The IPOB leader said more Nigeri­ans will be killed if leaders fail to carry out their responsibilities.

According to Kanu, “You think I am joking. They are coming. Your mothers will be raped. Your sisters will be married off as slaves. Biafra land will be decimated unless we equip this army.


“The worst is yet to come and more innocent people will lose their lives if community leaders fail to do the needful.


“I have the men. I need guns and I need bullets. That is all we need, and then we will win. I have been sounding this warning, and I have been telling you, ‘osi na ofu nti banye, osi na ko ozo puo”.


Kanu claimed that Boko Haram has an alliance with ISIS and that the group has lost confidence in President Muhammadu Buhari.


“Buhari was their god-fa­ther, they no longer trust him. I mean Boko-Haram, in this instance. Buhari they thought will give them sharia imme­diately. When Buhari said, “I don’t belong to anybody’’, from that day they intensified their bombing.”


“They will enter the zoo from Chad, very very shortly, not as Boko Haram. They are coming in as their franchise and as their name dictates. ISIS is coming,” he added.