How My Boyfriend Dumped Me After Eating All Her Mum's Chicken 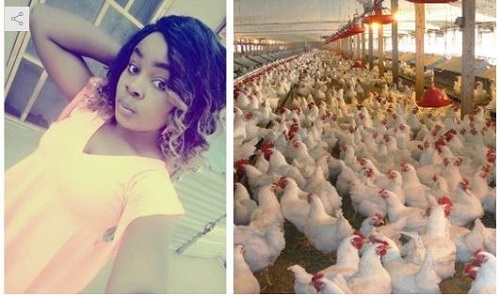 A Nigerian lady has taken to Twitter to call out her ex-boyfriend who dumped her after eating all her mum's chicken.

The young lady with the Twitter handle, @adeola_adereti revealed a story of how she had to steal both money and chicken from her mother's poultry in an effort to please her boyfriend, whom after all she did, still dumped her.

Read her interesting story below:

The name of d guy who ate my mama’s chicken n broke up with me d following week is Tunde. D story of hw we met started 3 months b4, and yes he was my 1st boyfriend. Our 1st time of having sex was in my parents’ house, under my mum’s nose. Follow me as I tell d story A thread.

I have often seen people pray for their parents. Some do wish they have the same kind of partner as their mum or dad. I don’t wish that 4 myself, and the only prayer I can pray for my parents is only for forgiveness. They literary damaged me. They know that now. But it came late.

I grew up in a highly religious family, where everything must be refined: language, dressing, friends, activities e.t.c We were just two, my sister (Iyanu) and I; and we have no say of our own. Our activities were defined; it must be from home to school or church. No other.

Our parents cut us off totally from the world. I grew up as a girl with so much hatred. I just detested others for being happy, because I have no such chance. So I kept no friends while growing up because their lives were not similar to mine, and I saw no point in togetherness.

My Mum often said the world is corrupt, and the only way we could be protected frm its evil fruits was to ‘keep away from the world’. So I grew up to enjoying staying inside the car whenever we attend a relation’s wedding or naming ceremony as a family. I was to eat my food there

I also grew up to fast most days when it was not comfortable. Mum often said fast renews one’s strength, and it gets one closer to God. And for that, I fasted most times, because I wanted to get closer to God—wanted to ask Him why he hated me so much to create me here.

So I was living in a cage, so to say. No freedom at all!! Tunde came into my life to change that. He was one of those men that supplied my mum her chicken feeds. Whenever they came, I was d one who attended to them. I was to make sure they supplied all that was ordered.

It was through this that we got talking and he often teased me about my beauty. And when I smiled, he would say I should keep doing it, cuz he loved it. I was not the one to feel comfortable when a guy was talking to me. I was brought up to feel ashamed—to feel unease, restive!!

But Tunde made me feel comfortable with him. He would force me to lift my head up sometimes, and also said I should look him straight in the eyes. When I managed to, he would say, “you are indeed beautiful. Just smile. Smile, Ola.” And I would. He would then call me ‘queen’.

When my closeness with Tunde was getting intimate, I started developing feelings for him. I just wanted to be with him all the time. He wasn’t anything close to Bro. John (my extra lesson tutor) in terms of beauty. But I loved him more than him.

Whenever they came to our place like that, he would send his colleagues away and create time for me. When I teased him that he would get fired at his work, he told me his Uncle owned the shop. Little by little we started kissing and hugging more prominently. He was good at it.

Whenever he did that, he would hold my breasts in his hand as well. And sometimes, he would bring them out of my blouse and suck them. Sometimes I felt like having sex with him, but my sister was always at home, in her room reading or resting.

By the way, Tunde and his colleagues only came to our house by evening. Something around 4:30pm. That was about time we came back from school. Our mother did always come back around 7:30. So when Tunde and his friends came like that, we spent 1hour together.

Fast forward to the day we had our first sex, we had planned it so well together. He was to jumped into our compound through the back fence, and stay inside our poultry around 9pm. And wait there until dad finished watching his NTA news by 10pm, and Mum finished d night devotion.

At around 10:45 when all this was done, Mum bade us goodnight. I made sure they had gone to their own quarters of the flat and my sister had gone to her room, before I opened the backdoor for Tunde. I ushered him into my room immediate. Moment later, we had IT. Good fuck!!

Later, Tunde started teaching me lies, so I could be coming out to see him at his place. My Extra Lesson section with Bro. John was every Saturday. I stay there from morning till late in the evening. Tunde saw it as an opportunity, so he asked me to liaise a deal with Bro John

When I told Bro John I would be seeing a friend sometimes on Saturday and that he should not tell Mum, he said he couldn’t come through with such deal. So I blackmailed him. I told him I would inform Mum about the story I shared here earlier, when I said he sucked my breasts once while teaching me, and he agreed to letting me see my friend. Later, Tunde and I were now seeing each other at his place. Each time, I made sure I cooked along. And each time, I get fucked. I must add that he fucked so well, the guys I met later in life were not close.

I also used to pay him money indirectly for fucking me, because each time I called him to inform him I was coming over, he would add “come with money”. The day I didn’t go with money, he refused to meet with me despite my pleas. So, every Saturday, I would keep 2k or 3k for him.

When my dad was sacked from work, and things got tough, I couldn’t afford to pay him again. So I resortd to killing a full chicken 4 him; whereas @ dat time, chicken was not in our food again at home. My Mum sold them now. Things were hard. Bt each Sat, a chicken must get missing

The penultimate week to our breakups (the story of which went viral here), I told him I wanted to come over, and he asked me to come with a flask of chicken. Aaaah!! We only had one chicken left in the cage. My Mum sold the others off a week bf, when she noticed they were missing one by one. I told him what was at stake and he told me to forget visiting him. I couldn’t afford that, so I told him I would find a way. You all know how it ended. I killed the ONLY chicken left in our cage, fried it, and gave it all to him.

The following week, he summoned me over. I took along a flask of spaghetti. No chicken, nor anything inside, this time. When I got to his place, he looked me from head to toe and told me I am becoming ‘fat’. I told him I had always looked that way and he got angry.

“Are you saying, I’m a liar!” I said I didn’t said that and wasn’t suggesting that. He slapped me and said I was raising my voice at him. When I knelt to beg him, he pushed me away and said a statement I would never forget, “Carry your cooler and leave my house. You too soft”

And that was it. He pushed me out. That was the last time I saw him. I was really damaged all through that month, and my mother made it worse. I have forgiven both of them now because I am a better woman for it. I learnt from it, and wear the lesson everyday. Now I’m free.

I got his twitter handle just now. He should stop threatening me. @vicrade Come out and tell the world what I did wrong then. I haven’t said anything wrong to you in anyway, have I?