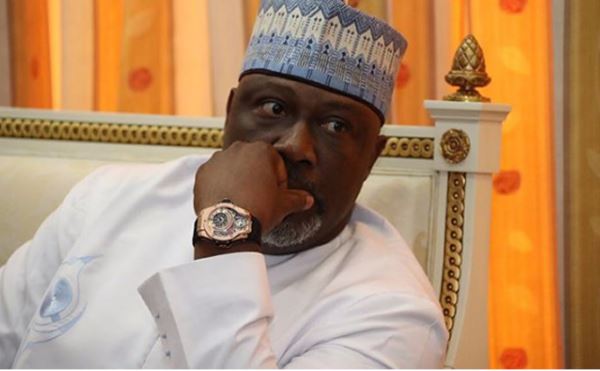 Dino Melaye
The Federal Government on Wednesday opened its case against Senator Dino Melaye before the High Court of the Federal Capital Territory in Maitama, Abuja, where he is being prosecuted for charges of giving false information against the Chief of Staff to Governor Yahaya Bello of Kogi State, Mr. Edward Onoja.
The prosecution led by Mr. Magaji Labaran called Onoja, who was allegedly framed as its first witness.
The case involves two counts in which Melaye was accused of deliberately giving false information to the police to frame Onoja in an alleged assassination attempt on his (Melaye’s) life.
The police said they discovered the alleged falsehood in Melaye’s claim while investigating the alleged attempt on his life at his hometown in Ayetoro-Gbede in Kogi State.
The senator on March 1, 2018 pleaded not guilty to the charges filed against him by the Office of the Attorney General of the Federation in January 31, 2018.
Melaye was in court on Wednesday when Onoja took the stand in the witness box.
The defendant was alleged to have in April 2017 given a false statement of facts in a phone conversation with Mr Mohammed Abubakar, a son of the late former governor of Kogi State, Abubakar Audu, with the intention of harming the reputation of Onoja
Onoja said he listened to the conversation himself on Saharareporters online.
He said, “Sometime in 2017, my personal assistant brought to my notice of an online reportage by Sahara Reporters of an audio recording between one Mohammed Audu and the defendant (Melaye) where my name was severally mentioned in relation to the aim of implicating my person in criminal activities, including arms running, alleged assassination attempt and threat to my and grand plan to bring the government I serve to its knees.”
He said he reported to the police after consulting with his family, friends and lawyers and was told to report to the police.
Onoja said he reported the case through a petition he wrote to the Commissioner of Police in Kogi State.
Under cross-examination by defence counsel, Mr. Olusegun Jolaawo, the witness said there were no issues between him and the defendant at that time, both of them were in two different factions within the same party.
He said he heard an allegation of an attempt on Melaye at his village in Ijumu Local Government Area of Kogi State.
Asked, he said he did not know if the audio file that appeared on Saharareporters had been tampered with.
Justice Olasunbo Goodluck on Wednesday adjourned the case till January 14 and 28, 2019 for continuation of hearing.