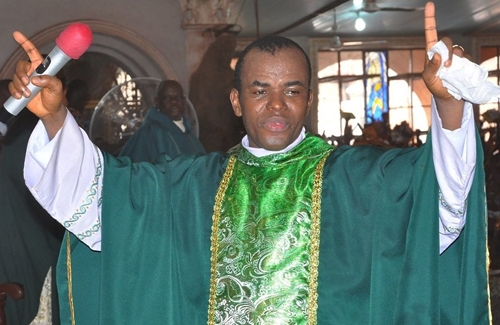 Fr Ejike Mbaka
In a statement released to the media, the Spiritual Director of Adoration Ministry Enugu, Nigeria (AMEN), Rev. Fr. Ejike Mabaka, refuted the report that he fingered the Church in his failed assassination plot.
According to Daily Sun, the outspoken Catholic priest, described the report published in some sections of the media as false and sensational headline curled by mischief makers and warned those behind it to desist.
Fr. Mbaka in the statement issued on Monday through his media aide, Maximus Ugwuoke, also said that it was absurd that unknown characters masquerading as ‘concerned Catholics’ could go wild to insinuate in the media that he planned his own assassination to attract public sympathy and presidential favour.
The statement read: “First, the assassination plot against Fr. Mbaka was not a mere ‘allegation’ or ‘claim’ as reported in the media but an established fact.

“The impact of the bullet on his car which the security agents have confirmed is there for all who cared to see.

“It is also ridiculous that two fictitious  characters masquerading  as ‘concerned Catholics’ could go wild to insinuate in the media that Fr. Mbaka planned his own assassination “to curry public sympathy and presidential favour.

“Such statement depicts how far mischief makers can go in trivialising issues as important as human life and their absolute lack of fear of God.

“The statement calls to question the level of concern of such ‘Concerned Catholics’ in such a matter involving the life of a catholic priest.

“We call on security agencies to investigate the source of such media report as the makers of the report or their pay masters may have some useful information to give them in their investigation into the incident.

“We challenge the two impostors claiming to be writing for the Concerned Catholics and to come forward with their real identity, parish addresses and contacts to prove the point that they exist and that they are Catholics.

“And where they fail to do so, we demand that the publisher of the report should be compelled by the security agencies to provide them for further questioning.

“We state categorically that in all efforts made to inquire from Fr. Mbaka the person or persons behind the gun attack at him, he never at any time named anyone or pointed accusing finger at anyone as the sponsor of his assassination plot, be it the Catholic Church or whomever.

“Such statement can only come from agents of darkness and liars from the pit of hell and should be considered as such,” the statement read.