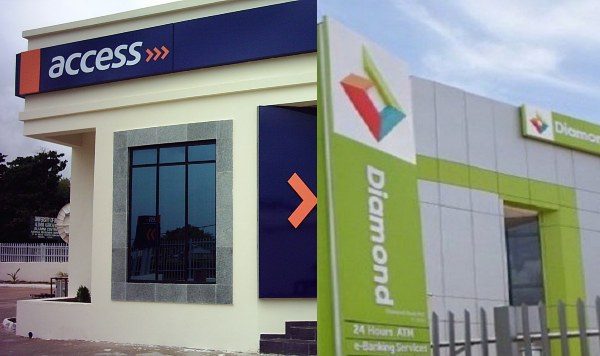 Access Bank Plc and Diamond Bank Plc have on Sunday, agreed to merge and signed a Memorandum of Agreement, which if approved by the Central Bank of Nigeria (CBN) and the Nigerian Stock Exchange (NSE), would move Access Bank, the principal partner, from number four to number two or number one in the nation’s banking hierarchy.

According to a report by THISDAY, the boards of the two banks met at about 7pm last night, and passed the resolutions agreeing to merge subject to regulatory and shareholder approvals.

A reliable source close to the merger talks said emphatically that, “The deal is done, what is left is for the Central Bank of Nigeria to stamp its seal of approval.”

While commenting on the merger agreement last night, Access Bank’s Chief Executive Officer, Herbert Wigwe, said, “Access Bank has a strong track record of acquisition and integration which has a clear growth strategy.

“Access and Diamond Banks have complimentary operations and similar values. A merger with Diamond Bank with its leadership in digital and mobile-led retail banking could accelerate our banking strategy as a significant corporate and retail bank in Nigeria and a pan-African financial services champion.

“Access Bank has a strong financial profile with a robust capital of over 20 per cent CAR (capital adequacy ratio) as at 30 September, 2018.

“We believe that this platform, together with the two banks’ focus and innovative financial inclusion and sustainability will bring benefits to the shareholders of Access and Diamond Banks."

A CBN official in the Financial Services Department, who did not want to be quoted because he was not authorised to speak, said, “If approved, Access Bank would be the right anchor and shock absorber for Diamond Bank depositors and shareholders. At CBN, our mandate is to protect depositors’ funds. This merger does that.”

The merged entity is expected to trade as Access Bank Plc with Diamond Bank logo subject to approvals.

Uzoma Dozie, the bank’s chief executive officer, had confirmed in a statement released on Friday that it would cease to operate as an international bank.

“The re-licensing as a national bank supports Diamond Bank’s objective of streamlining its operations to focus resources on the significant opportunities in the Nigerian retail banking market, and the economy as a whole,” he had said in a statement.

“The move follows Diamond Bank’s decision to sell its international operations, which included the disposal of its West African Subsidiary in 2017 and Diamond Bank UK, the sale of which is currently in its final stages.

“The change to national bank status also enables the bank to maintain a lower minimum capital requirement of 10 per cent, as against 15 per cent required for international banks.”

The bank recorded its worst month on record in November with share plunging to 0.61k per unit on November 30, 2018.

Diamond Bank Q3 2018 report had showed that the bank was under some financial stress with profit after tax falling from N3.9 billion in 2017 to N1.6 billion.