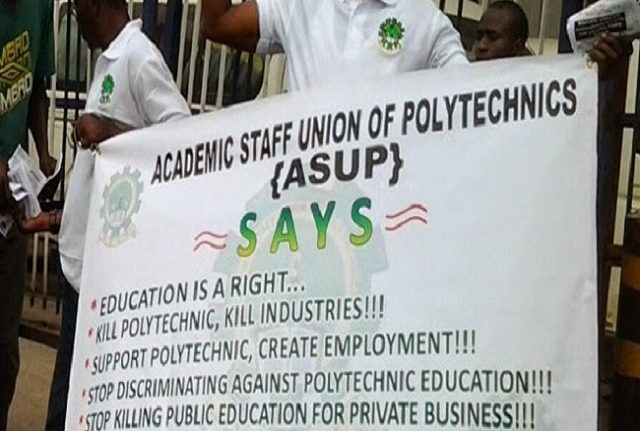 The Academic Staff Union of Polytechnics (ASUP) Wednesday began an indefinite strike over non-implementation of the 2009 and 2017 agreement reached with the union by the federal government.

The polytechnic lecturers have joined their university colleagues who have been on strike since November 4.

The National President of ASUP, Usman Dutse, said the federal government had invited the union for dialogue on December 17 but the strike would continue till then.

Prior to the strike, the union had on October 2 issued a 21-day ultimatum to the government before it extended it to November. But even then, it did not commence the strike.

But Dutse said the strike had commenced, adding that there is total compliance by all chapters.

“We have zonal coordinators and a monitoring team, zone by zone, all over the country. Already from the report we are getting, we are satisfied with the level of compliance from all our zones but we are reviewing the day’s activity in a meeting now,” he said.

Meanwhile, the News Agency of Nigeria reported that students were seen writing their 2017/2018 second semester examination at the Yaba College of Technology (YABATECH), Lagos.

But none of the striking lecturers was seen in all the examination halls monitored.

At the Lagos State Polytechnic, an official, Salami Olugbenga, said they could not join the strike because there was no organ of the union in the polytechnic since December 2017.

Dutse said the government has failed to implement and fulfill agreements it reached with the union as contained in the memorandum of understanding signed.

The union went on strike over non-implementation of the NEEDS Assessment report of 2014, non-payment of salaries in state-owned institutions, non-payment of allowances, and the victimisation of union members, among others.

ASUP went on strike in November 2017, but when the federal government reached an agreement to implement the recommendations of the 2014 NEEDS assessment, the strike was suspended 15 days after.

The agreement particularly highlighted the need for increased funding of polytechnics.