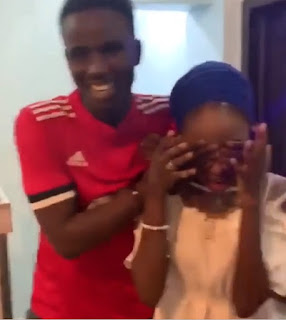 A 19-year-old teenage man identified as Zubairu, who is based in Abuja and is said to be a 100-level-student, has been trailed with mixed reactions after a video of his shocking surprise gesture, made to his girlfriend emerged on social media.
The young man is currently causing a stir online after he surprised his girlfriend, identified simply as Nihat, with a Mercedes Benz, iWatch and an iPhone X Max for her 16th birthday.
It was gathered that the guy's girlfriend is said to be an SS3 secondary school student in the federal capital territory, Abuja.