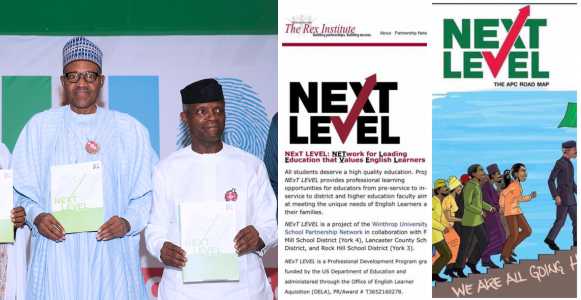 President Buhari and Osinbajo
President Muhammadu Buhari who yesterday launched his 2019 presidential campaign which he titled ‘Next Level’, has been accused of stealing ‘Next Level’ logo from Rex Institute.

President Buhari had argued that “the past few years have put us in good stead to trudge on the Next Level of building an even stronger nation for our people”.

However while Nigerians are divided on his re-election campaign, the ‘Next level’ logo, which has a striking feature with that of Rex Institute which is the creative elongation of the ‘x’ in ‘next’ in a manner as to give the pass mark to a candidate, has earned the Nigerian President call out posts on social media.

It is a Professional Development Program grant funded by the US Department of Education and administered through the Office of English Learner Aquisition (OELA), PR/Award #T365Z160278.