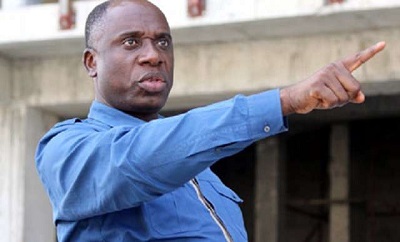 The Director-General of the President Muhammadu Buhari Campaign Organisation, Rotimi Amaechi, has played down the significance of a presidential debate ahead of the 2019 presidential election.

The president took part in presidential debates in the run up to the 2007 and 2011 presidential elections which he lost, but he failed to debate ahead of the 2015 election which he won.

With early signs from the presidency indicating that he might not show up for any presidential debates again ahead of next year's polls, many contestants have called on him to debate them.

While speaking during an interview on Arise News Television on Thursday, November 15, 2018, Amaechi said he made the decision for the president to not appear for the 2015 debate because it was unnecessary.

"I made that decision as the DG of the campaign that it was unnecessary. That it was better that he spoke to Nigerians as he went on the campaign. The debate does not offer the solution," the Minister of Transportation said.

When questioned about if the president would show up for a debate this time around, Amaechi said the president's campaign committee will make a decision at a later date.

He said, "What will inform that decision (to attend presidential debate) will be when we have sat as a campaign committee and we'll look at the issues. What do you want to debate about?

He later added, "I didn't say the president won't come. I said that when the time comes, we'll evaluate what the issues are."

While next year's election, scheduled for February 16, 2019, is expected to be keenly-contested between Buhari of the All Progressives Congress, and former vice president, Atiku Abubakar of the People's Democratic Party (PDP), they both face competition from other candidates including Donald Duke of the Social Democratic Party (SDP), Kingsley Moghalu of the Young Progressive Party (YPP), Obiageli Ezekwesili of the Allied Congress Party of Nigeria (ACPN), Fela Durotoye of the Alliance for New Nigeria (ANN), and Omoyele Sowore of the African Action Congress (AAC).

Others are Tope Fasua of the Abundance Nigeria Renewal Party (ANRP), Eunice Atuejide of the National Interest Party (NIP), Olusegun Mimiko of the Zenith Labour Party (ZLP), Adesina Fagbenro-Byron of the Kowa Party (KP), Chike Ukaegbu of the Advanced Allied Party (AAP), Hamza Al-Mustapha of the People's Party of Nigeria (PPN), Obadiah Mailafia of the African Democratic Congress (ADC), and many more.