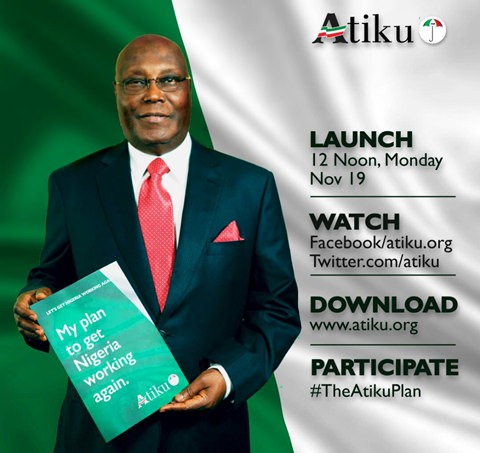 This is one of the key points in the policy document released by the PDP flagbearer today (Sunday), which details a seven-year timeline in which he intends to deliver on his campaign promises.

Giving a breakdown of the rate of unemployment in the country, Atiku said,

“Close to 16 million people are unemployed, nine million more than in 2014.

“Over two million new entrants join the labour force each year meaning the unemployed share of the labour force more than tripled in less than a decade: from 5.1% in 2010 to 18.8% in 2017
“Unemployment for women and young people is at 33%, 70% of unemployed youths are uneducated and unskilled.

“Creating jobs and economic opportunities for these people will be vital both for reducing the pool of easy recruits for violent groups and reducing underlying grievances that feed the conflict”.

As a solution, he said his administration, if elected in 2019 will,

“Launch a new, more efficient, cost-effective and sustainable national Entrepreneurship Development and Job Creation Programme.
“Target the creation of up to three million self and wage-paying employment opportunities in the private sector annually.

“Target all categories of youth, including graduates, early school leavers as well as the massive numbers of uneducated youth who are currently not in schools, employment or training.
“Create incubation centres, clusters and industrial/commercial hubs to provide a marketplace for MSMEs and SMPs. “Champion the repositioning and streamlining the activities of the existing Federal and State Government Job Creation Agencies”.

According to the former Vice President, he has plans to lift 50 million Nigerians out of poverty, by 2025.

Furthermore, he stated that he has plans to privatize the Nigerian National Petroleum Corporation (NNPC) and also sell all four national refineries. Other areas of focus in terms of infrastructure is the construction of 5,000 kilometers of roads, and 5,000 kilometers of modern railway.

A statement released on Saturday, by the Atiku Campaign Organisation, had explained that Atiku’s decision to kick-start his presidential campaign with the launch of his policy document was to reiterate his commitment to running an issue-based campaign.

It added that the intention was to take their policy directly to Nigerians and to register Atiku’s belief that it would take the collective efforts of every Nigerian to rebuild the country.

It read in part,

“That is why we want Nigerians to access the policy directly and ultimately take ownership of it,” it said, adding, “Our campaign offers a simple message: United, the people of Nigeria can begin anew, creating a prosperous and secure future and a better life for every Nigerian.

“Our policy document focuses on creating jobs, ensuring security, growing business, developing power and water infrastructure, agriculture and education and how we will empower women.

“Our policies outline the goals and methods for developing and revitalising Nigeria as the foundation of our campaign. This policy document is being launched to encourage a dialogue with the people of Nigeria, inviting everyone to join us in helping to get Nigeria working again.

“The PDP presidential candidate looks forward to conducting vital discussions as he travels across the length and breadth of Nigeria, meeting and talking with stakeholders – farmers, small business people, workers, students, mothers, and children.”