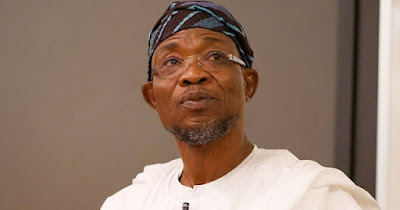 Osun State Governor, Rauf Aregbesola, on Friday described those protesting against the result of Osun State governorship election as being mentally unstable.


The Senate President, Bukola Saraki, Speaker of the House of Representatives, Yakubu Dogara, and the National Chairman of the Peoples Democratic Party (PDP), Uche Secondus were among the PDP leaders that staged a protest against the outcome of the election at the national headquarters of the Independent National Electoral Commission (INEC) in Abuja.


Aragbesola spoke with State House correspondents on Friday after meeting with President Muhammadu Buhari at the Presidential Villa, Abuja.

The Chairman of the APC Governorship Election Campaign in Osun State and Governor of Kano State, Umaru Ganduje and Governor Aragbesola, on Friday, also formally presented the Governor-elect of the Osun Election, Gboyega Oyetola to President Buhari at the Presidential Villa, Abuja.

The governors also thanked the President for his support in the election.