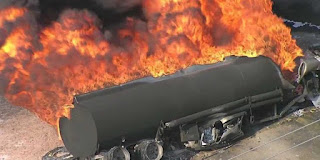 Five persons were, on Wednesday evening, confirmed dead in a tanker explosion which occurred in Akure, the Ondo State capital.

The incident, sources said occurred after the tanker had fallen off the highway along Shagari road, Akure.

It was also gathered that two taxis were gutted by fire resulting from the tanker.

The incident threw the residents of the area and the town into serious mourning and sorrow.


The state’s Sector Commander of the Federal Road Safety Corps (FRSC) could not be reached as at the time of filing this report.

It was learnt that the victims of the accident were taken to the state specialist hospital, Akure, while the corpses were deposited at the mogue of the hospital.