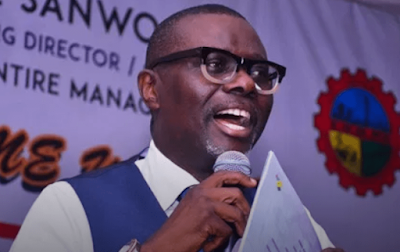 Lagos governorship aspirant on the platform of the All Progressives Congress (APC), Babajide Olushola Sanwo-Olu, has reacted to reports that he has withdrawn from the race.


The former commissioner has the backing of Mandate Movement, a group loyal to APC national leader, Bola Tinubu.


He had also been endorsed by the 57 chairmen of local government and council development areas, top party chieftains, PSP operators, and most recently all 337 ward chairmen in the state.


In a statement on Monday, by Comrade Sesan Daini, Director of Media, Babajide Olushola Sanwo-Olu Campaign Organisation (BOSCO), said the claim that the aspirant won’t contest in Saturday’s prinaries was false.


“We hereby state unequivocally that the purported press statement did not emanate from our Principal, Babajide Olushola Sanwo-Olu, rather it is the handiwork of jittery members of the opposition to malign our Principal and mislead members of the public.


“For the umpteenth time, Mr. Babajide Olushola Sanwo-Olu has not and will not withdraw from this race and he is ready for the party primaries slated for Saturday, 29th of September, 2018.


“BOSCO is not oblivious of the fact that these cheap attempts to mislead and hoodwink members of our party and the general public will be made by these disgruntled elements but we will continue to repeal their falsehood with facts.


“Our Principal remains committed to his campaign while still consulting with party leaders and members and would not be distracted by cheap blackmails like this.

“We want to use this opportunity to urge our teeming party faithfuls to troop out enmasse on Saturday, 29th September of 2018 to cast their votes for Babajide Olushola Sanwo-Olu to be the Flagbearer of our great party, All Progressives Congress (APC), in the forthcoming general elections in 2019.”