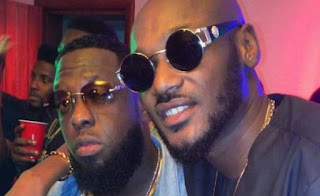 Nigerian singer, Timaya, who turned up for a radio interview with SoundCity FM, stated that only 2face can call himself a legend in the Nigerian music industry.

Timaya who disclosed that he doesn’t like being called a legend, said that some Nigerian singers address themselves as legends after being in the industry for 10 years.

“In this part of the world, many artistes when they get to 10 years, they start shouting ‘I’m a legend’, ‘legendary’. To me, in this industry, the only person that can call himself a legend is 2face. The others shouldn’t. Even if people call me a legend, I don’t like to be seen like that.”

The singer who also maintained that he is still the king of commercial music, added in the interview;
“The crown never leaves. I am Timaya anytime any day, 13 years is not three years. People don’t understand that making a hit song doesn’t mean you are a star. Stars always shine, some people can make a hit song and you will never hear of them again. There’s no year I’ve never dropped a hit song. I don’t want to be number one. I just want to be a musician. A lot of people have come and gone but I’m still here.”

“I don’t really go for weddings like that. I like the private marriage. If I want to get married, I will not do a big gathering. One thing is to get married, the other thing is to stay married. Staying married is the hardest part. Do you know what it means for two people with different upbringings to come and start staying together? That’s not a joke.”