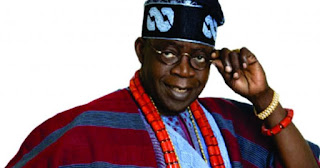 Ahead of the state governorship election slated for September 22nd, former governor of Lagos state and APC national leader, Bola Tinubu, has told residents of the state that they do not have the kind of money that would impress him.

Tinubu said this while reacting to claims that he was imposing the APC governorship candidate, Gboyega Oyetola on the state so he can embezzle the state resources when Oyetola is sworn into office.

Speaking during a visit to the palace of the Ataoja of Osogbo, Oba Jimoh Olanipekun, over the weekend, Tinubu said Oyetola, the APC candidate was reliable. Speaking in Yoruba dialect, Tinubu said.

“Oyetola is a reliable person. He may be quiet, but the sense he has… he is an encyclopedia of finance. He will not take a bribe; he will not steal your money. If he is looking for money, he would have stayed back in Lagos. Osun doesn’t have Oyetola’s kind of money. I’m not abusing the state. I asked those saying that I’m trying to plant Oyetola in Osun, that how much does Osun have? Osun doesn’t have my kind of money.” he said