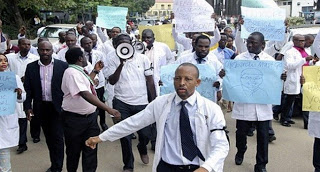 Ajibola, however, demanded that the state government keep to its promise of employing another batch of house officers by December 2018 as well as replace all exited residents within the shortest possible time.

“We also demand that the Lagos State Government put in place a structured policy for seamless, regular replacement of house officers and resident doctors in the hospital to avoid crisis and ensure the provision of effective healthcare to Lagosians”, he said adding that the association will further review the actions of the government in that regard at the end of October 2018.


The doctors had embarked on an indefinite strike following what they described as an unnecessary hardship on Lagosians seeking healthcare services in LASUTH as a result of the paucity of doctors (House officers and resident doctors) on September 5, 2018.