I am Ready For Probe – Fayose Writes EFCC 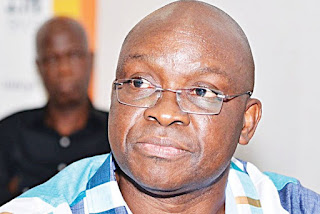 The outgoing governor of Ekiti State, Mr. Peter Ayodele Fayose has reiterated his commitment to submit himself to the Economic and Financial Crimes Commission (EFCC) for questioning after his tenure as Ekiti State governor expires by October 15, 2018.

Mr. Fayose revealed his deceision on social media where he tweeted;

“Yesterday I submitted a letter to @officialefcc informing the commission of my desire to make myself available on Tuesday October 16, 2018 at 1pm to clarify issues or answer questions on issues within my knowledge. My tenure as Governor of Ekiti ends on October 15.”

Mr. Ayodele Fayose who has been a vocal critic of the Buhari led Federal Government has had a running battle with the EFCC throughout his tenure as Governor. The Commission has often accused the governor of financial impropriety and has attempted to freeze his bank account twice without success.


Mr. Fayose had also hope to install his deputy, Mr. Elekha as his successor in the just concluded governorship election which was eventually won by the All Progressives Congress (APC) candidate, Kayode Fayemi; Mr. Elekha has challenged the election victory in court.

Read excerpts from the letter below;

Several and serial actions of your commission for some time now, including but not limited to freezing of my accounts and attempts to secure temporary forfeiture of my properties are indications of the commission’s desire to have me clarify some issues or answer some questions but for the immunity I enjoy under section 308 of the 1999 Constitution as the sitting Governor of Ekiti state.

I wish to inform you that my term of office pursuant to which I enjoy immunity against investigation and prosecution under the above provision shall lapse by effusion of time on Monday, 15th October, 2018.

As a responsible citizen of our great country, who believes in the rule of law, I wish to inform you of my decision to make myself available in your office on Tuesday, 16th October, 2018 at 1pm to clarify issues or answer questions within my knowledge.

Kindly confirm the suitability of the above date or indicate by return the Commission’s convenient date.

Please receive the assurances of my highest regard and due consideration.