82-Yr-Old Herbalist, Babatunde Rufai & Eight Others Arrested For The Murder Of Sergeant Esiabor 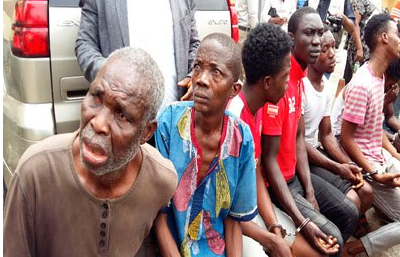 The police in Lagos have arrested an 82-year-old herbalist, Babatunde Rufai, said to be the head of Igunuko Masquerade; Ariyo Elegbede and eight others for alleged complicity in last week’s murder of Sergeant Collins Esiabor.

The policeman was lynched on August 29 by suspected members of Aiye cult group at Ifako-Ijaiye while protesting the death of their colleague.
Others arrested in connection with the killing are Adewunmi Suleiman, 28; Olorunda Michael, 21; Omoba Idowu, 27; Olarewaju Hammed, 20; Ransom Adewuye, 27; Ayo Adeyanju, 27; Anu Akinola, 24 and Ige Akanbi, 29.
Police Commissioner Imohimi Edgal said the herbalist allegedly treated a self-inflicted gunshot injury on one of the suspects, who mishandled an AK-47 rifle the mob seized from the slain Sergeant.

The police chief said Elegbede allegedly took part in the lynching of the cop, adding that both men were official native doctors for the cult group and usually treated members’ gunshot wounds without informing the police, as stipulated by law.

Although Elegbede denied the allegation, Edgal said he partook in the treatment of the injured member, said to have fled to Ondo State, and concealed the information from the police.
He said:
Quote
“On August 29 at Haruna Bus Stop in Ifako-Ijaiye, Ogba, a mob, for no good reason and without any provocation whatsoever, attacked a police team and vandalised a patrol van stationed to provide security in the area, leading to the death of Sergeant Collins Esiabor.

“I promised then that the command would unravel and prosecute those behind the dastardly act. Investigation launched into the incident led to the arrest of 10 suspects.

“The suspects are cultists, as attested to by one of them, Ayo Adeyanju, who conveyed the bocy of their late member to the burial site. On their way, they decided to avenge the death of the deceased on the police patrol team even though it was clear that the police had no physical contact whatsoever with the deceased.

“According to the suspects, the deceased sighted policemen within his vicinity and attempted to scale a fence, believing they were after him. Unfortunately, he put the wrong foot forward and fatally injured himself.

“Meanwhile, Rufai and Elegbede, mentioned as accomplices to the group, were also arrested. Recovered from them are a Dane gun and assorted charms.”

The police chief said the suspects would be charged with murder, adding that efforts were on to arrest other fleeing suspects.