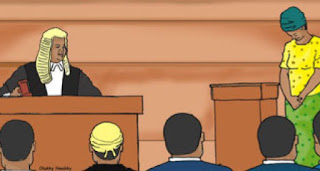 The Police on Monday arraigned one Eunice Nwankwo and her three children before a Mararaba Upper Area Court in Nasarawa State for allegedly killing a neighbour’s goat.

Nwankwo, 33, and her children, all minors, who reside at Aso C Extension, are being tried on charges, bordering on criminal conspiracy and mischief.

They, however, denied the charges.


The Prosecutor, Sgt. Hamen Donald, told the court that one Rebecca Daniel of the same address as the defendants, reported the matter at the Mararaba Police Station on Aug. 7.

He told the court that the complainant had alleged that the defendant and her three children conspired and killed her goat, valued at N10, 000.

Donald said that the offences contravened Sections 96 and 329 of the Penal Code.

The Judge, Mr Ibrahim Shekarau, granted the first defendant bail in the sum of N20, 000 with one surety in like sum.

He said that the surety must reside within the court’s jurisdiction and should be of reputable character with substantial means of livelihood.

Shekarau adjourned the case until Aug. 28 for hearing. (NAN)