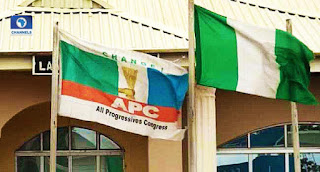 The All Progressives Congress has queried Senate President Bukola Saraki and given him 48 hours to explain why disciplinary action should not be taken against him for violating the party’s constitution.

In a resolution signed by its National Secretary, Mai Maila Buni, the APC accused Dr Saraki of breaching Article 21 of its constitution and engaging in anti-party activities.

Among several other allegations, the APC claimed that the Senate President “encouraged and facilitated by providing an enabling environment for the defection of some senators who are members of the APC to the other opposition parties”.

It also claimed that Dr Saraki “deliberately refused to screen nominees for appointments submitted by Mr President who are members of the party”.

“This has caused untold embarrassment and ridicule to the party and the government,” it said.

The party further accused the Senate President of causing avoidable delays in the budgetary process and passage of the appropriation act into law.

It also claimed that despite efforts to address grievances to reconcile aggrieved members, he worked against the process and encouraged the formation of an association which sought to impersonate and pass off the name of the party.

The APC dissolved its executives in Kwara State on Monday after it, among other things, said some members of the executives in the state participated in a rally calling on the Senate President to defect to the Peoples Democratic.

In its query to Dr Saraki on Tuesday, the APC accused him of organising the rally and of embarrassing the party.

Furthermore, the APC attributed delays in the budgetary process on the Senate President.

“You used the office of the Senate President to cause avoidable delays in the budgetary process and passage of the appropriation act into law thereby frustrating the implementation of the party’s manifesto and programs and frustrating the APC led Federal Government in the actualisation of the campaign promises of the party,” the APC said.

According to the statement, failure by the Senate President to respond to the queries will attract sanctions.