Workers’ salary arrears will be paid in six months –Fayemi 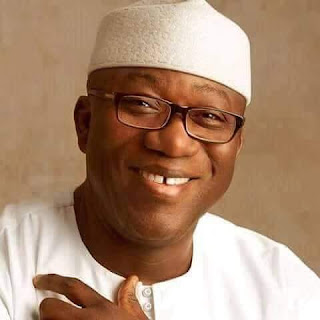 The winner of the Saturday’s governorship election in Ekiti State, Dr Kayode Fayemi, has said that he will pay the backlog of salaries owed civil servants in the state within the first six months of his return to office.

Fayemi of the All Progressives Congress beat Kolapo Olusola of the Peoples Democratic Party in a keenly contested race to succeed the incumbent Governor Ayodele Fayose.


Speaking at his residence in Isan-Ekiti, the former Minister of Solid Mineral Development, said Ekiti State lost value under Fayose, while also promising to re-introduce free education in the state.

“We will re-introduce social security scheme for the elderly in an enhanced manner. They should expect the return of our youth volunteer programme. Luckily, the Federal Government has started a programme similar to what we used to have in Ekiti State, called N-Power. We will add our own initiative to that programme.

“The outgoing government is not interested in what happens to the young in our society beyond using them as thugs and forcing them to eat crumbs from the table of the master. They should expect a return to decency, decorum, integrity, values in Ekiti State. It is about reclaiming our land and restoring our values which we have lost in the past four years.”

Meanwhile, an APC chieftain, Prince Dayo Adeyeye, has congratulated Fayemi on his victory at the poll.

According to the former Minister of State for Works, Fayemi’s victory will change the leadership style in the state, stressing that the people of Ekiti deserved mature leaders who value development of state’s human and natural resources.