UBA House is on fire!! 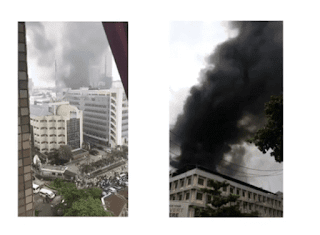 The United Bank of Africa, UBA, Headquarters in Victoria Island, Lagos is allegedly on fire.

The video was sent in by a social media user on instablog9ja who was close to the scene of the incident.

As of the time of writing this report, the cause of the fire is yet to be known, but from the sounds in the background of the video, the Lagos State Fire Service have made swift response and are already at the scene to prevent further damage.


We will implore every one close to that vicinity to take utmost care while working around the burning building.

We will keep you updated as more reports filter in.

In a similar incident that happened in 2013, fire gutted the five-storey UBA Plaza, on Bread Fruit Street, Lagos Island.

The building houses a branch of UBA on its third floor, several warehouses and shops, as well as offices.

Mr Uzuoma Aniekwe, who owned a shop on the ground floor of the building, told NAN that the fire started shortly before 5:00 p.m., and that he hurriedly evacuated his goods.

According to Aniekwe, the fire started on the fourth flood and spread rapidly to the fifth floor. If not for the swift response they had, they could have been consumed in the fire, he mentioned to reporters.