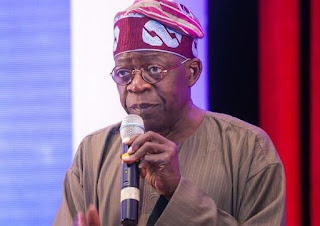 National Leader of the All Progressives Congress (APC), Asiwaju Bola Tinubu has declared his total support for the decision of the party to conduct direct primary to pick its candidate for the upcoming governorship election in Osun State.

Tinubu made his support known in a Tuesday statement through his media aide, Tunde Rahman.

He said that with the decision, the APC National Working Committee (NWC) had taken a historic step that will deepen democracy in the party and the nation as a whole.


Tinubu said, “The decision of the National Working Committee approving a direct primary to elect the party’s candidate for Osun election is a ground-breaking step toward achieving this fine objective. By this decision, the party affirms its democratic inclinations.

“When the history of this moment is written, those looking back on this decision will say that it was an inevitable natural consequence of party evolution.”

The statement read in part, “From its inception, our party has held to principles of internal democracy and, by the open and fair conduct of our conventions, we have distinguished ourselves from all other political parties. While we have achieved more than others with regard to internal democracy, there is still more to be done in order to perfect our internal procedures and mechanisms.

“This consideration was a key factor in the election of Comrade Adams Oshiomhole as party chairman. Core to that mandate is the improvement of democracy within the party so that we may become even better representatives of the people.

“However, I know differently. This decision took courage and conviction because it bucked the old ways in order to bring about something better and new. Comrade (Adams) Oshiomhole deserves commendation for leading the party toward greater democracy, which means increased participation of all party members in key decisions that affect them.

“The involvement of all APC members in candidate nomination will ensure that the party chooses the candidate of the people. It will also serve to galvanize the party membership for the general election that lies ahead.

“Moreover, direct primaries will serve as a future deterrent to those who might have tried to corrupt the delegate system of obtaining nominations. With that system, the temptation to ‘buy’ delegates was an ever-present weakness. Now, such a venal undertaking will prove much too costly and uncertain to be entertained as feasible strategy.

“I am sure party members in Osun welcome this decision for it shines the rays of democracy more fully upon them. May this decision not be peculiar to Osun but stand as the new way of our party. The nation and the APC will both be better for it”.