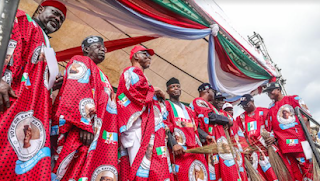 He said although the APC candidate, Dr Kayode Fayemi, won the election, Fayose and Eleka deserved commendation as they did not attempt to subvert the will of the people or plunge the state into violence.

Tinubu made this known in a Sunday statement through through his media aide, Tunde Rahman.


He said, “I would be remiss if I did not say a good word about the Peoples Democratic Party (PDP) candidate, Prof. Olusola Kolapo Eleka.

“He conducted a tough and energetic campaign. He wanted this seat but, in the end, he did not resort to violence to get his way.

“He allowed the people to make their own decision and for his adherence to this democratic principle, he should be recognised.

“The same must be said of Gov. Ayo Fayose. He tried his utmost to bring his candidate to victory but he did not cross the line by trying to subvert the will of the people through violent means.”

Tinubu in the statement titled “Ekiti Election: A Victory for the People”, lauded Ekiti people for throwing their weight behind the APC and its candidate, Dr Fayemi.

He therefore urged the governor-elect to justify the confidence Ekiti people reposed in him.

”Dr Fayemi must keep in remembrance that the people have placed their future in his safekeeping and he must justify their trust in him by doing all he can do to advance their welfare.

“I’m confident that Fayemi will keep faith with the programmes and policies of our party in order to improve the lives of the people of Ekiti.

“I know Fayemi will establish an all-inclusive government that involves all stakeholders in his administration and in the governance of the state.”

He noted that, ”In Ekiti, a chapter has closed and a new one has begun. This was not done by contrivance or artifice, nor was it the product of intimidation or improper influence.

“This came about because it was the will of the people of Ekiti as expressed and manifested in the conduct of a free and fair election in that state. In voting as they did, the people thus voted for themselves.

“Here, we must congratulate Dr Kayode Fayemi and our party, the APC, for the successful campaign that was run and for the confidence the people of Ekiti have shown in transferring the mandate to govern them into our hands.”

Tinubu added, “Dr Fayemi is a man of integrity and his government will not be one of recrimination. It is a government of the people and as such will focus its attention on helping the people, not suppressing yesterday’s political opponents.

“I urge Gov. Fayose and Prof. Kolapo Eleka, as prominent citizens and leaders of Ekiti, to move forward in that same spirit. Let there be an orderly transition from the outgoing to the incoming government.

“Last and most importantly, let us commend the people of Ekiti. Casting aside all the dire predictions, they conducted themselves with the patience, sobriety and collective wisdom befitting the moment.

“Instead of turning things upside down, they turned to peace and mutual respect for each other as well as respect for the democratic process.

“Above all else, the election was your election and yesterday was your day! With the choice that you have made, may tomorrow also be your best future.”