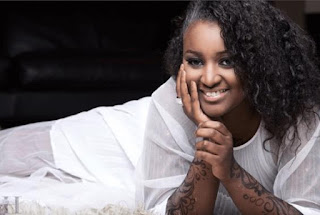 Rahma Indimi, one of the daughters of billionaire oil magnate Mohammed Indimi, has taken to Instagram to share a cryptic post, which has been termed as a dart targeted at her former husband.

The mother-of-four, who has not been allowed to see two of her kids ever since she and her husband Mohammed Babangida separated and went with two kids each, has constantly lamented about not being able to see her offspring.


On their birthdays, she makes sure to post emotional messages that reassures them of her love, while promising that they will meet someday. The mother and her kids have been separated for more than two years.

Yesterday, she shared a quote from Prophet Mohammed directed at "whoever separates a mother from her child."

Their split was confirmed by Rahma in 2017 following the leak of an audio recording of her husband allegedly badmouthing his current wife.

Rahama then took to social media to confirm the news of their separation referring to herself as his former wife.
She wrote:

"Woke up to this, a recording of Mr Mo saying some nasty things about his current wife? I wonder what he has been saying about me when we were married (not cool muha,not cool?) may Allah protect us all from people like this. Ameen#justsaying" 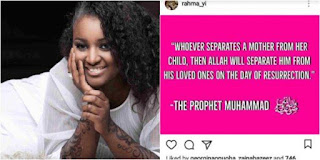