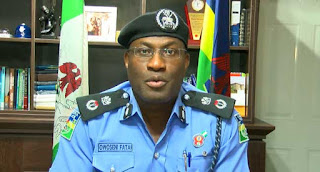 The Nigeria Police Force (NPF) on Tuesday said it is not aware of the siege laid on the residence of the President of the senate, Bukola Saraki by security agencies.


The report revealed this claim was made by the NPF spokesman, DCP Jimoh Moshood who said he is not aware of the development.

“I am not aware. You are just informing me,” he told our reporter on the phone.
DCP Moshood who promised to get back to us, added that the last communication he was aware of is the letter asking Saraki to make himself physically available to interrogators at 8am today.
Policemen on Tuesday morning blocked the convoy of the President of the Senate, Bukola Saraki at Lake Chad Junction, Maitama, Abuja.

The NPF on Monday sent an invitation letter to Saraki asking him to appear before investigators in Abuja.

The Senate President is expected to answer questions in the case of Offa bank robbery and murder of more than 31 persons, including the snatching of 21 AK 47 Riles on 5th of April 2018.

Meanwhile Saraki has stated that the invitation to him by the Police to report to a station in Guzape over the Offa robbery investigation is a mere afterthought which is designed to achieve political purpose.