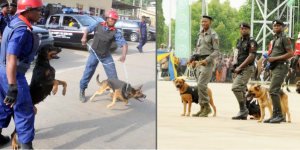 The Nigeria Security and Civil Defence Corps will need N310m to feed and administer drugs to dogs that will be deployed in states for the 2019 elections.

The Nigeria Police Force will also require N7m to feed 50 horses that would be used for patrol during the elections which will take place between February 16 and March 2, 2019.

Report from The PUNCH indicates that the information is contained in the 2018 virement proposal sent to the National Assembly for the 2019 general election by President Muhammadu Buhari.
Police, Civil Defence Demands Funds to Feed Dogs Ahead of 2019 General Election

The total police budget for the elections stands at N30.5bn; the Office of the National Security Adviser, N4.2bn; the Department of State Services, N12.2bn; NSCDC, N3.5bn and the Nigeria Immigration Service, N2.6bn.

The balance of N242bn needed to fund the 2019 elections will be captured in next year’s budget.

According to the details of the 2018 request the President submitted to the National Assembly, the NSCDC needs N1.2bn this year to prepare for the elections.

According to the document, police election budget this year stands at N679m, with N7.7m earmarked for feeding of horses and N100m for printing of non-security materials.

In the details, the NIS also requested N126m for printing name tags for its personnel that would be involved in the elections while N166m was requested for pre-election training.

The DSS, in the request would need N2.9bn to prepare for the polls this year.

About N120m was budgeted for fuelling generators during the elections which will last for 21 days while N100m was set aside for post-election investigations.

In the N1.6bn details, the ONSA requested N250m for a national election crisis response exercise involving all security agencies and relevant ministries, departments and agencies.

About N200m was budgeted for the deployment of equipment including satellites while N130m was earmarked for election monitoring.

In his letter which was sent to both chambers of the National Assembly, the President said the figures had been subjected to “the usual budget evaluation.”

The breakdown of INEC’s budget was, however, not stated in the proposal sent to the National Assembly.