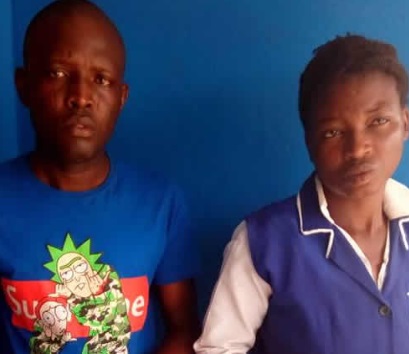 The Ogun Police Command has arrested one Dr. Olawale Raji and a nurse, Funmilayo Olusegun, both pictured above, for allegedly carrying out an abortion that led to the death of one Aminat Atisola, 35.


A statement released by the spokesperson of the command, Abimbola Oyeyemi, says the doctor and nurse were arrested on Thursday July 26th after a complaint from Bose Kazeem, a resident of Atan, Ota, who is the sister of the deceased. Bose said Aminat was two months’ pregnant and had contracted the service of the two suspects who worked in a private hospital for the abortion. The doctor accompanied by his nurse, carried out the illegal abortion in the house of the victim.

The police said Funmilayo’s health deteriorated shortly after the abortion and died while being rushed to the Federal Medical Centre, Abeokuta. The Divisional Police Officer, Onipanu

Divisional headquarters of the command at Ota, Sangobiyi Johnson, was alerted and he led a team of detectives to the scene where the two medical practitioners were promptly arrested.

He said Aminat’s remains have been deposited in the mortuary of the State General Hospital, Ota, for post mortem examination. The suspects will soon be transferred to homicide section of the State Criminal Investigation and Intelligence Department, Abeokuta, for proper investigation and prosecution.

The spokesperson added that abortion remains illegal and that whoever is caught engaging in it without any medical justification will be dealt with.