Our daughter can’t be married at 17 – Family warns pastor, ‘husband’ 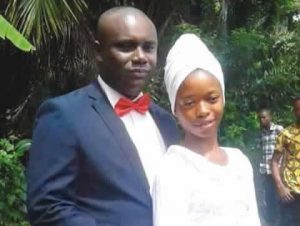 The family of 17-year-old Blessing Udoye has berated a pastor of the Fishers of Men Charismatic Church, Isiokpo, Imo State, for allegedly wedding the girl to a “stranger”.

According to The Punch, the pastor conducted the wedding in his church on Sunday and instructed the girl not to inform her family members.

A brother of the girl, Raphael Udoye, was quoted by the paper as saying that Blessing had disappeared from home days to the wedding and had not been seen since as her phone number was no longer reachable.


He said his sister had been kidnapped by her alleged husband as he did not seek the family’s consent to marry her.

He disclosed that he heard about the purported wedding from some of Blessing’s friends and informed other family members including their father, who were all shocked by the news.

Raphael said that investigations revealed that the pastor had planned the wedding for six months without bothering to inform Blessing’s family members.

He said the news of the purported wedding made his father confront the pastor who said there was nothing he could do about it.

“I don’t want my sister to get married now, I want her to go back to school; she is still young.

“But if she wants to get married, her husband should come in a rightful manner and ask for her hand in marriage,” he said.

The Punch quoted an unnamed elder in the church as saying that the church frowned on marrying women without seeking their family’s consent, adding that the matter was already being investigated.