Okotie Declares For 2019 Presidency; Begs APC, PDP To Adopt Him 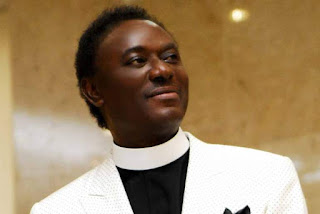 The Senior Pastor of Household of God Church, Rev. Chris Okotie has formally declared his intention to contest for the presidency in 2019.

He made this known during Sunday service at his Oregun, Lagos-based church yesterday.


Stating his reasons for joining the 2019 race, Okotie said, “Nigeria has become a divided and segregated society like never before.

“I have re-emerged from political hibernation to contest the office of president in the forthcoming election.

“I am fully persuaded that Nigeria needs a man who is credible, dependable and trustworthy.

“In sincere humility and deference to our democratic institutions, I appeal to the APC to subscribe its support to this ideal by adopting me as a consensus presidential candidate at the next election.

“I ask the APC, respectfully, within the confines of conventional propriety, to temporise and observe a peaceful hiatus in commonality of the Nigerian brotherhood and embrace me as a consensus remedial facilitator.

“This, of course, is tantamount to a paradigm shift and the only way forward. I have extended the same overtures to the PDP.”

He blamed elitism, mysticism and satanism as the greatest threats to the nation’s political life while advocating ‘aboriginal democracy’.

This, he said, would focus on cultural, historical and evolutional modernity and global relativity.

Okotie also called on restructuring of the country to achieve development.

The cleric added, “Nigeria is in dire need of restructuring. Our federalism is simply terminological in-exactitude.

“It is a realistic piece of fakery. The constitution of the Federal Republic of Nigeria is obsolete. It can no longer subsist as the legal protocol that guarantees the peaceful co-existence of autonomous ethnicities. No extant or subsisting government can right these aberrations.”

Furthermore, he called for the dissolution of the National Assembly and fusion of their function with that of the judiciary to save cost.

Okotie said, “Aboriginal democracy will focus on cultural, historical and evolutional modernity and global reality as the necessary ingredients of our evolutional political indigeneisation.”