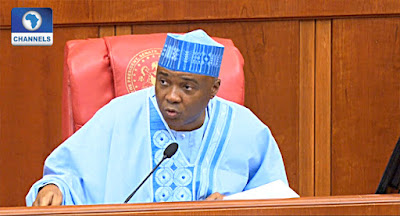 The police have invited the Senate President, Dr Bukola Saraki, over the deadly robbery attack on six banks in Offa town of Kwara State.

The letter of invitation dated Monday, July 23, was personally signed by the Inspector General of Police, Mr Ibrahim Idris.

Senator Saraki was asked to report to the Head of the Investigation Team at the Intelligence Response Team on Tuesday morning in Abuja, for further investigation on the matter.

He recalled that the Police Intelligence Response Team (IRT) had launched an investigation into the incident which claimed 31 lives, including nine police officers and pregnant women while the suspects made away with some AK 47 rifles.
Worst Armed Robbery

The IGP said investigation revealed that a CCTV footage captured the image of two persons involved in the attack, who were later identified.

“The two persons were tracked and arrested by the police and they made very useful statements and named the five gang leaders who organised the armed robbery,” he said.

“Some of the five gang leaders made confessional statements admitting their participation in this worst armed robbery in the history of Nigeria and that they are political thugs under the name, Youth Liberation Movement aka ‘Good boys’.”

The police boss stated that the suspects also claimed the group was sponsored by the Senate President, and that he allegedly gave them “firearms, money and vehicles”.

He added that another suspect, who drives a vehicle with an alleged plate number indicting Saraki, claimed to be the head of the group which reportedly covers about seven local governments areas of Kwara South.

Mr Idris noted that the suspect, in his confessional statement, said members of his group were political thugs allegedly working for Dr Saraki and the Kwara State Governor, Abdulfatah Ahmed.

He said the gang leader also mentioned three other thugs in Kwara Central allegedly sponsored by the Senate President, saying, “Everyone in Kwara Central fears them because of their guns and ability to kill anybody without hesitation”.

The IGP then referred to Senator Saraki’s response to the allegations, quoting him as saying, “By virtue of my participation in politics, I have a large followership which makes it impossible for me to know all of them. I can say categorically that I am in no way associated with the vehicle mentioned in your letter nor have I given any arms to any thug or other persons in Kwara State or anywhere else. For the records, your letter under reference did not include the full text of the statements made by the accused persons.”

In view of this, Mr Idris disclosed that the police have decided to invite the Senate President for further clarification on the matter.

Senator Saraki and Governor Ahmed have since denied any involvement in the attack or sponsoring any political thug.