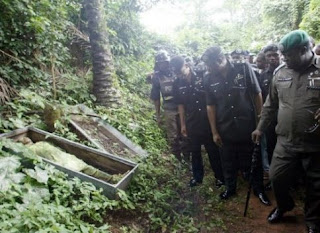 Police have discovered the bodies of 41 persons suspected to be part of bandits terrorising villages in Zamfara State, north-west Nigeria.


Kenneth Ebrimson, the Commissioner of Police in the state confirmed the figure while briefing reporters in Gusau, the state capital. According to him, police personnel found the men with their throats cut at different locations in the state.

Ebrimson revealed that 18 bodies were discovered in a river on Sunday and 23 others at a forest in the Zurmi area of Zamfara. He added that four suspects were arrested after the bush area was combed while the police recovered machetes and guns during the search. The police commissioner disclosed further that the suspects were identified as members of a local vigilante group who decided to embark on a mission of “extra-judicial killings”.

While residents were unable to identify any of the bodies who they said were not resident in the area, the police said they could be members of a group involved in cattle rustling and kidnapping. Farming and cattle herding communities in Zamfara have for years been terrorised by gangs of cattle thieves and kidnappers who raid villages, steal cows and abduct locals for ransom.

As a hideout, the gangs use the Ruggu forest which straddles Zamfara, Katsina and Kaduna states. The attacks have prompted villagers to form militia groups for protection but they, too, have been accused of taking the law into their own hands and killing suspected bandits. Those killings attract reprisals from motorcycle-riding criminal gangs, who carry out indiscriminate killings and arson in retaliation.

In April the Nigerian government deployed troops to Zamfara to fight the gangs while the police outlawed the vigilantes to end the tit-for-tat killings.