My Stupidity is Bigger than Yours – Yahaya Bello to Fayose 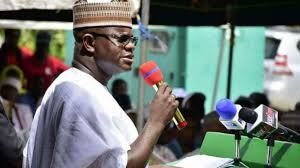 He made this challenge at the All Progressives Congress (APC) mega rally in Ekiti State while campaigning on behalf of the party candidate, Kayode Fayemi.

While addressing the crowd, he regretted not being around when it was reported that the Governor of Ekiti state had allegedly disrupted a peace parley organised by INEC in the state earlier in the week.

He assured the crowd that they will not be intimidated by Ayodele Fayose because “Nobody has a monopoly of stupidity, we shall tame him” which could literally be interpreted as having a substantial share of stupidity.

He continued his address further by tracing kogi ancestry and how they had settled in Ekiti state a long time ago which confirms that they are also stakeholders in the state and he was there on a legitimate mission.

“Our grandfather, great grandfathers, fathers and mothers for over 100 years lived in Ekiti state. And as such, more than 75% of the farm centres are occupied by the people of Kogi state. In fact, it means, wherever we voted, it is surely victory. Exactly the way we did it in Ondo state, we are going to repeat it here in Ekiti state”

On the issue of the disrupted stakeholders meeting, the kogi state governor said referring explicitly to the Ekiti State Governor,

“We heard that there was stakeholders meeting and there is someone called Fayose, and he disrupted it. Wallahi, he is lucky that I was not there. Anyway, that one is by-gone. Saturday, we will send him packing from governance. I will be here with you. Nobody will intimidate you.

“Your Excellency, I have already entered into covenant with them and they have promised me that they will not be intimidated, that somebody does not have monopoly of stupidity. We shall tame him on Saturday.”

The Ekiti State gubernatorial election is scheduled for July 14.