Couples Arrested For Trafficking Girls For Prostitution, Force Them To Sleep With 10 Men Daily 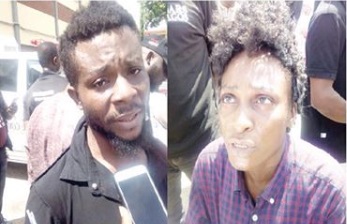 
the CP disclosed further that the suspects lured the victims with promise of jobs and better living, adding that when the victims got to Lagos, they were forced into prostitution.
He said,


“On July 1, 2018, at about 2pm, the command received information that one Ikechukwu Egbulefu and Vera John are trafficking ladies to the state.

“On the strength of the information, the Federal Special Anti Roberry Squad investigated the accusation, which led to the arrest of Ikechukwu Egbefule (27) and Vera John(26) at Wagbas Hotel, Ajah, Lagos.

“The victims of the crime were rescued, comprising Helen Dickson (22), Deborah David (18) and Chiwendu Onyekachi (18)."

The CP said the victims revealed that the suspects took them to a shrine in the Epe-Ijebu area of Lagos State to swear to an oath that they would not abscond from the hotel, adding that after the victims had sex with various men, they surrendered the proceeds to Vera John
While speaking to a correspondent, one of the victims, Onyekachi, said, “I know Egbulefu from my village in Imo State. He told me that he had a job for me as a sales girl in a hotel in Lagos, so I followed him and he introduced me to John who told me the kind of job I would be doing. When I didn’t accept, she threatened to abandon me on a road to suffer.


“They made us to swear to an oath so we would not run away. They took Dickson and me to one herbalist that used hair from our head and private parts to make soap and we were told to use the soap to bath. They also gave us one black thing to eat. They said if we run away, we would run mad.
“I was turned into a prostitute; I used to sleep with 10 people in a day and make up to N20,000. Even during menstruation period, I still had sex with men.”

Another victim, David, said, “I was told that Egbulefu’s wife needed someone to work for her. It was when I got to Lagos that John told me the work was prostitution. Since I don’t know anybody here, I decided to do the work just to gather money and go back home. I have been here for two weeks.

The suspects admitted to using young ladies for prostitution. Ogbulefu said, “I informed them that it was prostitution job before bringing them to Lagos and they agreed. We had an agreement with them that if they worked with us for a year, we would give them N1m.

“So because I don’t trust anybody and don’t want a situation that these girls would be used for a year and they won’t be settled, I instructed my girlfriend to take an oath with them so that they would not be betrayed and they won’t betray us. My plan was to settle the girls at the end of the year.”


John, who hailed from Abia State, said she was in charge of collecting money from the victims.

The Abia state indigene said, “I do collect N6,000 and sometimes, N10,000 from these girls when they close. Onyekachi was the one that said she doesn’t make enough money and asked if I know anywhere to take them so they can get more patronage.

"So I took them to a herbalist who took a fowl, soap and their hair to make soap that they will use to bath to wash away bad luck.”

The CP however, said the suspects would be charged to court. 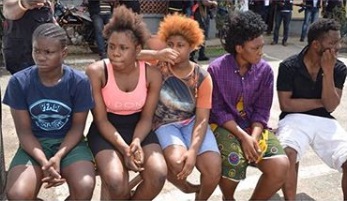