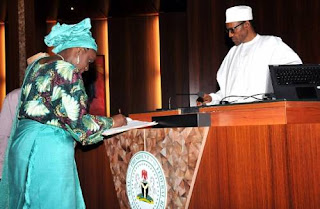 The National Youth Service Corps (NYSC) has announced that Kemi Adeosun, Minister of Finance, "did apply" for a certificate of exemption.


However, in the confusing confirmation, issued in reaction to an investigation by Premium Times exposing how Adeosun allegedly forged an exemption certificate, Adeyemi Adenike, Director, Press and Public Relations of the Corps, also promised to investigate the origin of the "puported exemption certificate".


“Our attention has been drawn to the issue of the alleged forgery of an NYSC Exemption Certificate by the Honorable Minister of Finance, Mrs. Kemi Adeosun,” read Adenike’s statement.


“Checking our records, Mrs. Adeosun did apply for an Exemption Certificate.


“We shall investigate the origin of the purported Exemption Certificate in question. Thank you.”


The Premium Times story had shown that the certificate was among the set of documents submitted by the Minister for her appointment and screening in 2015.


The newspaper first wrote to the NYSC on April 16, 2018 requesting verification of the certificate.


After weeks of silence and promises, the paper’s editors decided to re-channel the request through a Freedom of Information request.


This followed disappointment suffered by journalists working on the story when the formal letter that was to be issued on June 1 by the organisation was suddenly withheld.


The newspaper’s reporter who was at the NYSC headquarters on Thursday, May 31, was told to come back the next day to pick up the organisation’s response, following intense checks that afternoon that confirmed that “Folakemi Adeosun” was not in the register.


However, on arriving on Friday, June 1 to pick the response, a new decision was announced: the NYSC officials said the verification had been channelled to the organisation’s ICT unit to check its “electronic database”.


The organisation then became curiously non-response to the newspaper’s request.