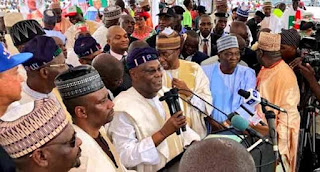 Former Vice President, Atiku Abubakar has officially flagged off his presidential campaign following the declaration of his intention to run for the office of President of the Federal Republic of Nigeria in the 2019 Elections on the platform of the Peoples Democratic Party (PDP).

While declaring the start of his campaign train in Yola the Adamawa State capital, the former Vice President lamented the state of unemployment in the country.

“Today, we have the highest unemployment rate in the history of our country. More than 10 million youth are unemployed,” He said at a gathering of supporters and members of the Peoples Democratic Party (PDP) at the rally.

He went further to accuse his former party from which he decamped again to the PDP, the All Progressives Congress (APC) of poor leadership and mismanagement of the economy. He also condemned the repeated killings across the country saying Nigeria has never faced this type of security challenge since independence.

He, however, promised to revamp the nation’s security architecture, ensure the safety of lives and property, as well as fix the economy if elected as Nigeria’s president.

With less than 210 days to the presidential election, Atiku was confident that he would be triumphant in the 2019 elections on the platform of the PDP. He asserted that the PDP would reclaim power at the centre from President Muhammadu Buhari and the APC if he was given the party’s ticket.

“Today I have returned to reclaim what rightly belongs to the PDP. My fellow Nigerians, the government of APC has failed; it has failed to unite Nigeria.” He said.

“Today, we are more divided than any other time in the history of this country. The APC government has destroyed our economy. They took over an economic growth of seven per cent and brought it down to less than two per cent,” he further asserted.

Atiku Abubakar was a former APC chieftain who defected from the party in November 2017 after which he returned to the PDP. He had contested against President Buhari and three others for the APC ticket in the build-up to the 2015 general elections.

Having lost to the President in the APC primary conducted in 2014, the former Vice President reportedly collapsed his structure to support President Buhari during his campaign.

He had left the PDP to join the APC in February 2014, after he lost the presidential election of 2007 on the platform of the then Action Congress.

While he was in the PDP, he had declared his intention to run for the Presidency in 2011 but lost to former President Goodluck Jonathan.

The former also contested for the Presidency in 1992 on the platform of the then Social Democratic Party (SDP), but later stepped down for late MKO Abiola who won the convention primary.

He was Vice President of Nigeria from 1999 – 2007 under the administration of Chief Olusegun Obasanjo. Both men did not see eye to eye towards the end of Obasanjo’s 8 years in office. One of their purported disagreements was the alleged third term agenda of Chief Obasanjo and the refusal of Obasanjo to anoint him (Atiku) as his successor; Obasanjo chose late President Yar’adua instead.