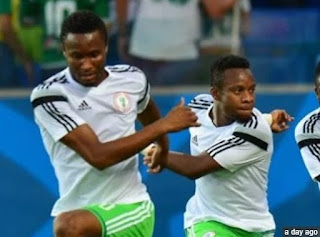 Contrary to the make-believe video that there are no squabble between John Obi Mikel and Ogenyi Onazi, Daily Sun Sports has exclusively reported that all is still not well in the Super Eagles’ camp ahead of the 2018 World Cup.


According to a new report last night, the Trabzonspor of Turkey midfielder, Onazi, has been dropped as Super Eagles’ assistant captain.

A camp source hinted that national team manager, Gernot Rohr is not disposed to the appointment of a vice captain, saying the idea was counter productive to his plans ahead of the Mundial.

“Rohr has resolved to cancel the position of vice captain in the Super Eagles as it is believed to be one of the issues militating against the team.

“Mikel remains is the captain and have been told to hand over the captain’s band to the most senior player on the pitch whenever he is being substituted.

“By this pronouncement, Onazi ceased to be Super Eagles’ vice captain from now on,” the source revealed.

It was also gathered that due to Onazi attitude in camp, Mikel has asked for the player to be dropped but the Nigeria Football Federation (NFF) fears a backlash as some players are believed to be loyal to him.

Onazi, according to the camp source may miss the first group game against Croatia as the technical crew would claim an injury prevented him from the tie.

Meanwhile, the Super Eagles will fly out of their Avita Resort in Bad Tatzmannsdorf, Austria to Russia today for the 21st FIFA World Cup finals – their sixth appearance in seven finals since making a debut in the USA in 1994.

Since emerging from so called ‘Group of Death’ in the African qualifying series, becoming the first African team to reach the finals in Russia, the Eagles have played against Argentina, Poland, Serbia, DR Congo, England and Czech Republic in friendlies, winning two, drawing one and losing three.