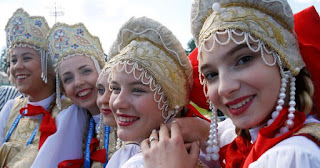 The chariman of a Russian parliamentary committee has urged Russians to abstain from sex with foreign fans arriving for the World Cup.

Tamara Pletnyova, who heads the Family, Women and Children Affairs committee in the lower house of parliament, told the Govorit Moskva radio station that such behaviour was likely to lead to single parent families.


“There will be girls who meet men, and then they will give birth. Maybe they will get married, maybe they won’t. But the kids will suffer, just like they suffered [after the 1980 Mosco Olympics].”


Ms Pletnyova claimed her comments were not motivated by nationalism, but suggested it was better if children were born from parents of the same race.
England team arrive in Russia for World Cup

“It is one thing if the parents are of the same race; quite another if they are of different races,” she said. “We should give birth to our own children.”

The politician chose not to mention the use of condoms.

Russia has the largest HIV epidemic in Europe, and the highest rates of increase in the world. More than half of new HIV infections in Russia occur through heterosexual sex, suggesting a transition from more traditional risk groups is underway.

By some estimates a million football fans will arrive in Russia for the tournament. More than 2 million tickets have been sold.