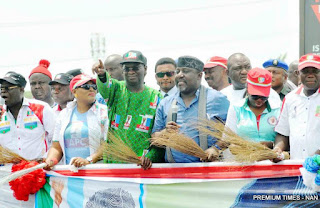 A heavy security cordon was on Tuesday thrown on the Oluyemi Kayode Stadium and other strategic areas in Ado Ekiti ahead of the mega rally of the All Progressives Congress (APC).

Personnel of various security agencies, including the police, Nigeria Security and Civil Defence Corps well as the FRSC were sighted at different locations keeping vigil.

The News Agency of Nigeria (NAN) reports that Vice-President Yemi Osinbajo and other APC stalwarts are being expected at the rally meant to galvanise support for the APC flagbearer in the July 14 governorship election, Dr Kayode Fayemi.


A NAN correspondent, who went round the Ekiti capital to monitor the development, reports that scores of armed mobile policemen were deployed in and around the Oluyemi Kayode stadium, venue of the rally, with those entering being thoroughly screened.

There was also tight security at strategic locations, major roads as well as the palace of the Ewi of Ado Ekiti, Oba Adeyemo Adejugbe, who is scheduled to play host to the visitors.

The State Police Commissioner, Ahmed Bello, said the large number of officers and men deployed was necessary to prevent any security breach.

Besides, he said the calibre of personalities being expected demanded that such security arrangement be put in place to put criminals at bay.

The Director of Media and Publicity of the Kayode Fayemi Campaign Council, Wole Olujobi, also expressed satisfaction with the security arrangement, saying the party had learnt some lessons from certain events in the past.

He disclosed that the vice president would be representing President Muhammadu Buhari at the event.(NAN)